A mysterious ‘alien-like creature’ with a reptile skull and a lengthy tail arrives on an Australian beach, and the footage quickly becomes viral. While walking on a beach in Queensland, Australia, a guy discovered the body of an “alien” creature, spawning hundreds of internet hypotheses about what the strange-looking creature with “humanlike hands” and a “long lizard tail” could be.

When Pastor Alex Tan came to discover the skeleton of the dead animal, he made a horrifying discovery.

On Friday, pastor Alex Tan told CBS News that he wasn’t terrified when he initially spotted the animal. He initially thought he saw a “three-meter flatty,” an Australian term for flathead fish.

“Then as I got closer, I was just extremely curious about what the heck was this?” he added, describing the three-foot-long animal.

He first shot clips of his meeting with it on March 21 at Maroochydore Beach, more than 60 miles from Brisbane, according to the social media video service firm Storyful.

The beast had “humanlike hands, a long reptile tail, a possum nose, and patches of black fur,” according to him. Tan then posted videos of the monster resting on the beach to his Instagram account on Tuesday.

“I’ve discovered something strange,” he remarked in one of the films. “This is similar to what you see when someone claims to have discovered aliens.”

“Looks like a deer head possum, but unlike anything I’ve ever seen,” he remarked in another video footage.

Hundreds of Instagram users guessed the creature’s identity, which ranged from “mini-Chupa-cabra” to “extinct marsupial.” The animal was most likely a bloated, wet brushtail possum that had lost its fur, according to Stephen Johnson, an associate lecturer at the University of Queensland.

“The clues are in the cranium and hindlimb,” he explained. “During the floods, the animal was presumably washed down into the ocean.”

Tan agrees with Johnson’s notion and has given a “chicken parmi” friendly wager that the animal is, in fact, a possum. But he, like everyone else, is intrigued.

“I believe everyone is so invested in this, and we just want answers,” he told CBS News. “The public wants answers.” 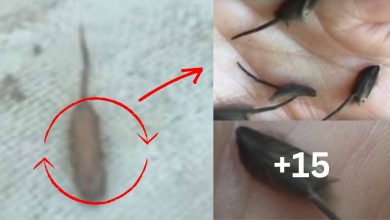